From Yggenyk
Jump to navigation Jump to search 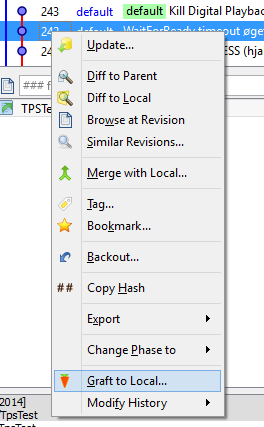 copy changes from other branches onto the current branch

This command uses Mercurial's merge logic to copy individual changes from other branches without merging branches in the history graph. This is sometimes known as 'backporting' or 'cherry-picking'. By default, graft will copy user, date, and description from the source changesets.

Changesets that are ancestors of the current revision, that have already been grafted, or that are merges will be skipped.

One-level undo. Will undo the last pull or commit (can be dangerous)

Create a new commit that is the inverse of a given commit.
Net effect is an undo, but the change remains in your history.

Remove (destroy) changes from history.
Removing a changeset also removes all of its children, so it can only be used to truncate history, not remove a slice.